Life on the Range – Chapter 8

The property “Hillcrest” of 1,074 acres was purchased in May, 1973 by W.N. & R.N. Bainger Pty. Ltd. from Bert and Daphne Tilley who retired to Victor Harbour. Hillcrest was enlarged in 1980 by 445 acres when a neighbouring block was purchased from the Bagshaw family.

Although the Bainger family had owned land in the Lucindale and Conmurra area for over thirty years it was not until a member of the third generation on the land, Robert Hugh, (son of R.N. of Frances) decided to marry, that any of the family resided in the area.

Hugh and Clare (nee Tuohy, who grew up in the Penola district) were mar­ried in the Hillcrest garden in October, 1973. They now have three children – Fleur Clare, Alexis Jane and Charles Robert.

In 1971 the Tilleys had replaced the original freestone homestead with a new brick home. Most of the established garden was left intact, and has been further extended by the present owners.

The property is now used to graze beef cattle and the original freestone woolshed, chaff shed and dairy are used only as storage areas.

An Agricultural Graduates Lease was allotted to John Alexander Hensley, a Lucindale farmer on 28th July in 1888. When J.A. Hensley died in 1902 the land was transmitted to James Gibson Ashton of Adelaide Official Receivers and subsequently transferred to Mary Ann Stewart of Payneham.

In 1929 the lease was subdivided between W.G. Copping and Percy William Flint a grazier of Mt. Scott. In 1938 W.G. Copping died and the land was trans­mitted to Sophia Beatrice Copping and Leslie Walter Copping both of Lucinda le.

In 1949 this was transferred to various members of the Michell family. In 1954 the lease was subdivided into two – one being named “Westlands” and the other “Delkara” owned by H.J. and E.H. Carracher and their son-in-law Bruce Iredell.

Bruce Iredell married Jill Carracher in 1954 and came to live in an old stone cottage on the property later that year. They had been living there for four months when they went away for the weekend and returned to find the cottage burnt to the ground. They had lost everything including all their wedding pres­ents. They lived in a caravan until a Stawell transportable home arrived in May the following yeat.

Jill had been told there were few snakes about. A rumour she strongly dis­believed after 52 were killed around the house in the first year.

The property which is mostly flat with some banks was very wet in winter until the Jacky White Drainage Scheme was completed in 1963.

Access to the main road between Lucindale and Kingston was hence difficult and a landrover and tractor were the only methods of transport until a special grant was issued for a road in 1958. The grant was issued on the condition that Delkara fence it.

Jill and Bruce had a new car for 3 months before they could drive it onto the property.

It was some years later before the telephone went in.

Bruce Iredell relinquished his interest to Geoffrey William Carracher and Garry Nicholas Carracher in 1963 and the property was named Waipali Estate.

The lease on the remainder of the property was subdivided between M .J. Carracher and G. N. Carracher and the family partnership was dissolved in 1977.

M.J. Carracher named his property Long Island and sold this in 1984 to P.P. Thring and Company.

G.N. Carracher named his property Bogalara and with his family now runs a successful Merino Stud WEST KILMARNOCK. The stud being transferred from his father-in-law R.J. Lawrie who retired in 1983.

We arrived at Avenue Range on December 4th, 1978, from Parndana, Kangaroo Island. The property was purchased from Keith and Shirley Mules.

After coming from a relatively isolated area we were pleasantly surprised at the better roads, cheaper cost of living, and access to good markets. In our case, the move to Avenue has been for the better, and we have no regrets.

Our three girls were all married prior to our coming to Avenue. Two live in the Kingston area, and one in the Mid North.

After purchasing the property “Ancoona” from Stan and Helen Cooper, Kevin and Phyllis took possession in March 1973.

The first twelve months were the hardest adjusting from a cropping, dairying background at Strathalbyn to the way of farming in the West Avenue area. A disadvantage of the area is the distance from shopping, schooling and sporting facilities, but the heavy carrying capacity and sureness of rainfall help to out­weigh this.

The property has some historical background with the old coach track running lhrough it, with ruins of the stable and inn still plainly visible.

Ray and Dellrene Phillips, together with their two teenage daughters Shona and Debra and their young son Matthew, arrived at Avenue Range from

trathalbyn in May 1974 to reside on the farm purchased from Mr. Peter Barnett.

Their elder son Grantley and his wife, formerly Judy Daw of Mt. Barker, came lo the S.E. the previous year to live on the land purchased 8 years earlier from Mr. Robert Ferguson. They later moved to their own farm, purchased from Mr. Peter Donaldson. They have two daughters and one son. Shona, immediately on arrival in the South East started her nursing training at the Naracoorte Hospi­lal. She married Philip Hollitt of Coonawarra and they now reside at Glenalta, where they own a business. They have one son and a daughter. Debra attended the Lucindale Area School, and after completion of her studies, entered the National Bank at Naracoorte. After her marriage to Kingsley Sharam of Kingston, she worked at the Kingston Area School. They have two small sons.

Matthew attends the Lucindale Area School and is in Year 9.

The property “The Stone Chimney” was purchased from Mr. Ian Currie and later sold to Mr. Andrew Copping.

Approximately 12 months ago they purchased the West Avenue farm of Mr. Domaschenz.

Bob Pope had lived all his life at Murray Bridge working on two properties with his father and two brothers. After being married ten years we came to the South East with our three children and settled at Mt. Benson in 1960. After seven years this land was sold and we bought better grazing country at Avenue Range, moving in on New Year’s Day 1967.

We purchased 1785 acres from Jim and Alma Bourne. These folks were Soldier Settlers who sold their land within ten years because of health reasons. This property was larger than most allotted to the Soldier Settlers as it had the usual acres to be a liveable size, plus almost 800 acres still scrub and very wet country, all on the same lease. After the Soldier Settler Scheme and before we bought in many drains were put through this country.

Our two daughters went to the Lucindale Area School for a short time, then went to Adelaide to finish their schooling. Dianne graduated as a craft teacher and Pauline trained at the Mt. Gambier Hospital winning a gold medal. Both are now married and living and working on the land.

Jeff who had passed his Intermediate in Kingston, decided to be a grazier and work with his Dad. They soon got busy with big tractors etc. and started clearing and seeding down what was previously too wet to handle. This now is some of our best country, growing lush clovers, and other pastures. On this land we now graze 1,500 ewes plus their lambs, 2,000 wethers, 120 cows with their calves and 50 unmated heifers. Approximately 10 years ago we started a Poll Dorset Stud now carrying 70 ewes. Six years ago we started a Murray Grey Stud – now unregistered – and we run 25 of these cows.

Early in 1985 we were successful in putting down an artesian bore. After all these years of having salty water it is pleasing to have very good water suitable for lawns and gardens. We hope to pump this water into every paddock on the property.

When Jeff and Pam married in 1975 we, Enid and Bob, moved into a small transportable house not far away. Four and a half years ago we sold the trans­portable house and built a large brick home on the same spot. In 1985 Jeff, Pam and family moved into their new big brick house on the old site.

Jeff and Pam have two sons and one daughter.

Lindsay and Faye Pratt moved to Avenue Range from Two Wells with three of their four children on June 4th, 1978.

They had purchased their farm, “Kallinga” – 1,001 hectares – from John Newberry, a chemist in Adelaide. This property was once part of Bull Island.

Since their arrival they have extended the size of the house from three to six rooms and built a raised board shearing shed. Bracken fern appeared a problem, but they found, by chisel ploughing and planting lupin crops they are able to keep the bracken under control.

Mark and Catherine arrived at Avenue in early February 1980 from Urania in lhe Riverina district of New South Wales. They were, however, both from the Adelaide Hills area.

“Westlands” was purchased by P.P. Thring & Co. Pty. Ltd. from the Adelaide Steamship Company Ltd. who in turn had bought it from G.H. Michell and Sons. Previous to that it had been owned by David Barratt and earlier still by Harvey Limbert.

Mark and Catherine manage “Westlands” for P.P. Thring and Co.

The main improvement concerning stock since they arrived has been the in­lroduction of selenium into the diets of the young sheep. This has meant a profound difference in the health of their weaners over the last four years.

John and Cassie Thring came to “Westlands” in May 1983 as newlyweds. In July 1984, P.P. Thring and Co. purchased “Long Island” from Michael Carracher, and since then have resid?d there as managers.

In 1965, R.L. Bagshaw and his son Richard acquired land from Brian Cop­ping, the land being portion of “Cairn bank”. The Bagshaw family were early settlers and pioneers on York Peninsula and the forebears of Laurie arrived in Australia from the Isle of Man, in 1838 – just two years after the settlement of the colony.

R.L. and his wife, Ellen Grace, had three children: Jan, who married Mark Roberts, an architect formerly of Tasmania. Their wedding was the first marriage ceremony celebrated in the new Anglican Church of St. Andrews in Lucindale in 1965. They have two daughters, Sally and Alison. Richard married Patricia Mary Wilson, daughter of Dr. R.K. Wilson and his wife, Joan who was formerly Joan Daw, whose forebears resided at “Fairview”. They have two sons born at Avenue. In 1980 Richard and his wife and family transferred their interests to land in southern Queensland – they now reside at Goondiwindi where Trish has resumed her teaching profession. Richard was an ardent foot­baller and supporter and gained life membership of the Lucindale Football Club. The second daughter of Laurie and Nell was Julie Elizabeth, a triple certificate nursing sister who died in Greece in 1977, when with a nursing friend was motoring to Geneva from Athens to nurse with the World Health Organization. All the trees planted along the driveway up to Laurie and Nell’s home were given by friends of Julie’s as a memorial to a beautiful girl.

Laurie and Nell still reside in the homestead portion of their holding where they have great interest in local affairs and the By the Way project. 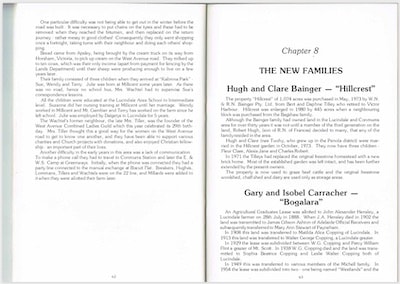