The Avenue Store by Heather Sanders 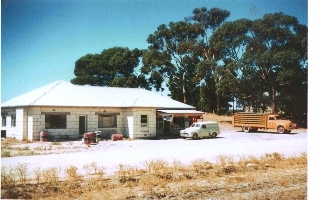 Heather Sanders (nee Thomas) worked at the Avenue Store for Norma and Dick Benger for five and a half years in the early 1960s.  They sold the store to Norm and Wilma Whitbread and Heather continued to work for them for two years until her marriage to Gary Sanders in 1968 when she left to live at Capella in Queensland.

Dick Benger started a fuel depot at the back of shop. In those days fuel was stored in 44-gallon drums. A rabbit chiller was put nearby, and people paired rabbits together and hung them over poles in the chiller then went down to the shop to collect their money. Once a week someone came to empty the chiller.

When she was going to school at Avenue, Heather can remember the gypsies stopping at the shop. These are the only gypsies she ever saw. In lunch breaks at school the children were allowed to take their bowls down to the back to pick blackberries and then over to the shop to put a sixpenny ice-cream on their blackberries. It was a real treat.

On Friday nights the shop was a meeting place for everyone, as it was mail night and people came for mail and usually a few groceries as well. On Sunday mornings people also came in after church to pick up mail and groceries.

It was a happy community to live in. Heather has many happy memories of Avenue and still keeps in contact with Wilma Whitbread from time to time.

more about the avenue store by wilma whitbread

Dating from 17th December 1966 to May 1973 the owners and occupants were Norm and Wilma Whitbread (Norm deceased 3rd September 2017). The house was comfortable to live in but during wet winters mould and dampness was very evident and unpleasant. The telephone exchange was converted from restricted hours to 24-hour service 7-days a week. The rabbit freezer had capacity to hold 700 pair of rabbits collected weekly by a buyer from Mount Gambier.

Darcy Rivett, a local super spreader, surrendered delivering bag super and carting wool bales to the railway siding. This work was then carried out by Norm.

At the shop we also held an agency For Elders GM. Norm was able to give service to farmers delivering the Jute wool bales and various other supplies.

The commonage at the rear of shop had heaps of blackberry bushes that made lovely jam. Also, the area was very useful to practice my golf swing.

A noise was heard in the dead of the night. Someone was pumping petrol. It turned out to be local, Peter Trott. He had run out of fuel and didn’t want to wake us.

We went into Lucindale to church one Sunday and left the shop door open. We came home to find a local young man minding the shop for us (I cannot remember his name).

There was a phone box next to the shop. Bill Rivett came along and saw a snake sunning himself between the shop and the phone box. He demolished it with his firearm that he carried in his ute (how times have changed).

A very happy six and a half years were spent at Avenue Range with our three children, Carol, David and Susan. The local community spirit was enjoyed.