Life on the Range – Chapter 4

The first passenger train to travel on the line from Kingston to Naracoorte was on September 1st 1876 with a train consisting of an engine and covered trucks. There were thirteen passengers, who each paid 13/6 for the journey. Mails were also carried. From 10th July 1876 the line had been in use as a tramway for the carriage of goods and mails, the trucks being drawn by horses. Horses were changed at Lucindale. It is generally stated that this service was conducted by William Lucas. On the day before the official opening on January 16th 1877, The Oddfellows Lodge arranged a monster train picnic to Kingston. Five hundred and fifty one people attended and it was a huge success. For many years afterwards there was an annual train picnic to Kingston. Photographs show the crowded trains with a dozen or more carriages hauling their cargoes of chattering holiday-makers on such day trips. One photo shows light canvas­ canopied trucks packed with children. The original carriages were unlighted so that passengers took care to provide themselves with candles which, when dark came, were stuck by means of their own grease on the wooden back of the seat in front.

The railway station at Avenue Range used to be a neat little two-roomed weatherboard building with seats outside the waiting room. One night in about 1943 it was burnt down mysteriously, and caused quite a lot of interest in the district. As far as is known, no-one could ever prove what happened, but it was always suspected that one of the local identities had been to Naracoorte for a periodical binge and, after being put off the train at night, had gone to sleep in the station. Sometime during the night he must have dropped a cigarette butt or, maybe, lit a fire to keep warm.

A Telegraph (worked by telephone) and Public Telephone Office was opened at Avenue Range on 1st September 1915, together with the new Receiving and Parcels Post Office. This followed a petition from thirty local residents to the Deputy Postmaster-General, Adelaide, for the provision of postal and telephone communications.

The Office was in the charge of Lillian Alice Thomas and was conducted in railway premises adjacent to the Naracoorte – Kingston railway line (and a quarter of a mile from the railway station).

Barbara Thomas, the wife of Ganger Thomas, was appointed Postmistress on 1st December 1919 when the Post Office was raised in status to an Allowance Office.

A report in 1919 said that the Avenue Range Office served thirteen house­holders in addition to about twenty men employed on the drainage works in the district.

By 1923 the Office served approximately 80 people.

Telephone Office keepers over the years have been:

The Post, Telegraph and Telephone Office was removed from railway premises on 1st August 1924.

A telephone exchange with one subscriber, A.O. Copping (and a public telephone) was first listed in the telephone directory of October 1925.

The number of subscribers lines has been:

Continuous telephone service was provided from 1st May 1972. An automatic exchange with STD was opened on 28th March 1979. 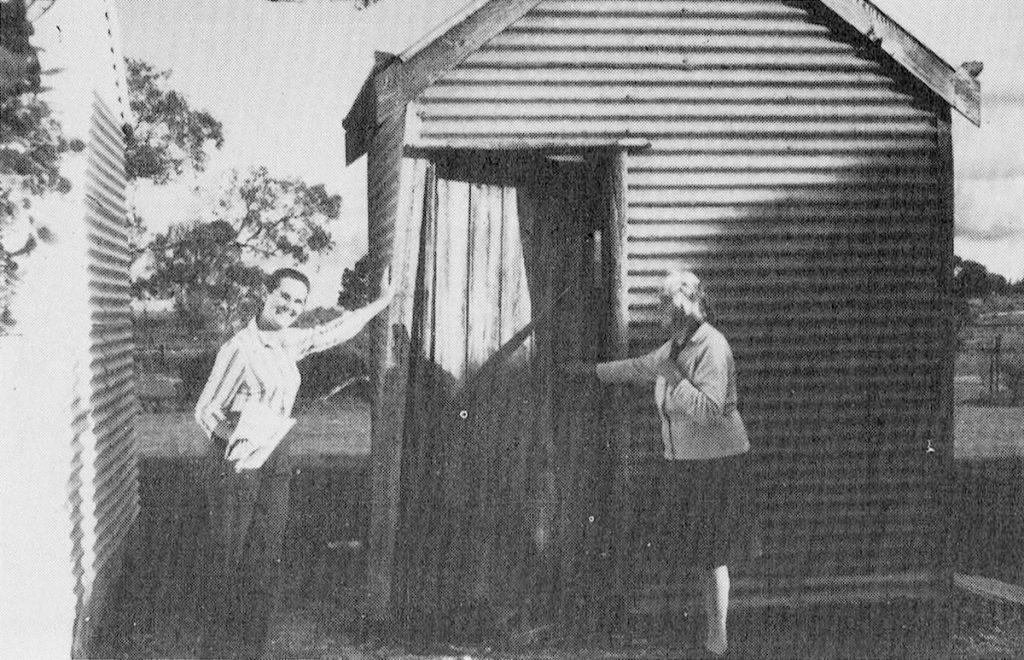 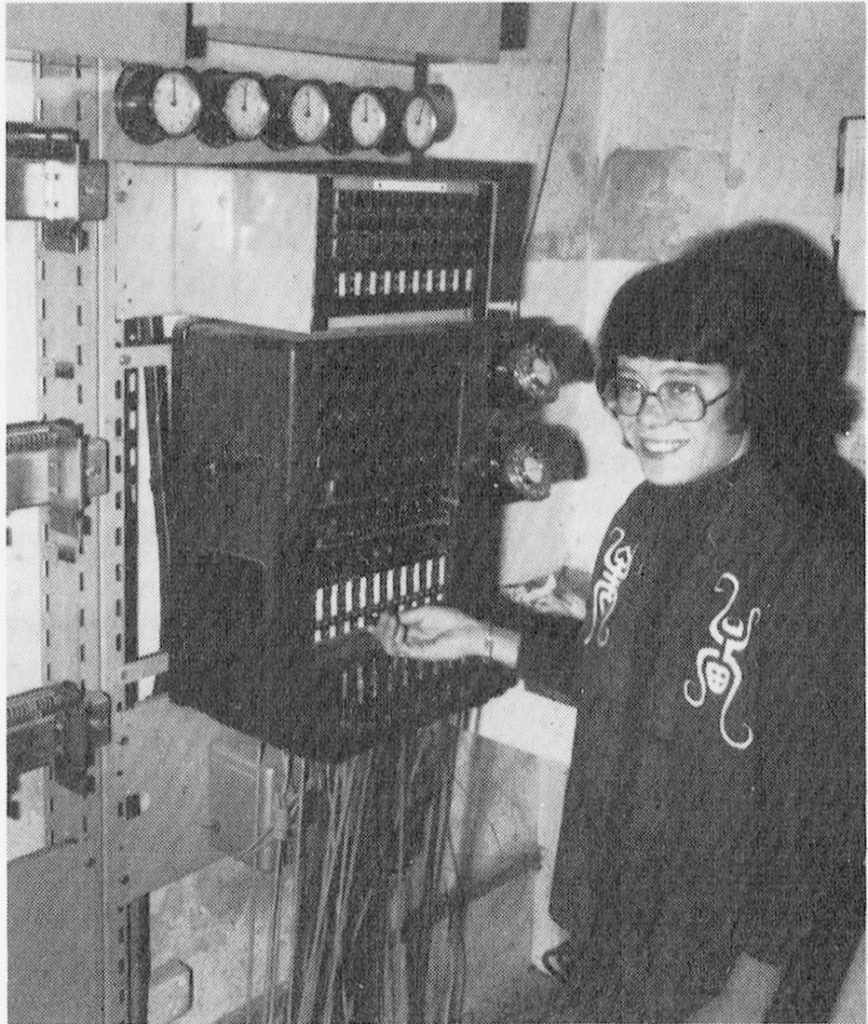 These railway cottages were built in the 1890’s. Mr. and Mrs. R. Thomas lived there until 1923 when they had a new home built where Mrs. Thomson now lives. Only two of the Thomas family are now living – Lil Dow and Hilda Thomson. Lil was Post Mistress till her marriage on February 8th 1922. The bridal party walked across the railway line to the church for the wedding. Hilda Thomson (nee Thomas) became Post Mistress in 1924 and carried on for thirty years.

Martha and Os Rivett moved into the cottages in the late 1920’s and had a family of nine children all of whom lived there till they moved to Sherlock in November 1947.

Mr. and Mrs. Bill Beaglehole lived in the cottages for a short time and were followed by Charles and Betty Kirkham. The Kirkhams raised four children -Lindsay, Lynette, Judy and Greg – while Charlie worked round the district.

Not shown in the photograph was a beautiful tree which in the spring had clusters of white pea-shaped sweet-smelling flowers. Since the cottages were removed in the early 1980’s the tree has died. It would have been over 70 years old. The dead tree stands as a monument to the old residents and the younger generation who played under it.

Drains played a very important part in the district of Avenue. Jacky White’s drain, east of Avenue, was dug in 1884. This was an asset to the area, it made much of the low lying land usuable for stock. Stone carted from the banks of Jacky White’s drain was used in the building of the Avenue Church in 1901.

Drain K on Grieve’s “Fellwood” property was cut in 1914 and K. L., the complete drain, was finished in 1918. With these drains more of the flats were able to be developed for Soldier Settlement blocks.

Photo shows drains being dug on “Fellwood”. Norman Wallace of Naracoorte in the foreground.

The first tennis court was in a corner of Stan Hocking’s paddock south of the railway line. It was used until the roots of trees made the surface too uneven to play on. In the early 1900’s tennis courts were made of scraped earth with the lines marked with a mixture of lime and water.

The next move was to the corner of Thomas’ paddock on the western side of the old post office. Here Lou Thomas would skim the weeds as the ground was very hard and made a good surface for a court. In the early 1950’s the Avenue Progress Association built the first court on the site of the present courts alongside the cricket pitch.

For many years the only organized sport played at Avenue was cricket. It is reported in the Naracoorte Herald of January 7th 1936 that on January 4th the Reedy Creek Cricketers travelled to Avenue Range to play a game. Reedy Creek dismissed the Avenue team for 68 runs. Allan Barnett was top scorer for Reedy Creek making 13 runs. K. Thomson, top scorer for Avenue was 32 not out.

Minutes have been found of meetings held on October 29th and November 10th 1938. At the second meeting 0. Rivett was elected president of the Avenue Range Cricket Club, G. Natt was vice-president, R. Turnbull – secretary and L.H. Thomas – assistant secretary. The bank balance was 1-8-5 pounds. Membership was set at 5/- and there was to be no ball foe.

The next recorded meeting was held on August 23rd 1946 with A. Grieve as president. The following year when P. Conrick was president and K. Copping secretary it was agreed to open a bank account at the Savings Bank of South Australia in the name of the Avenue Range Sports Club. Subscriptions to be raised to 10/6.

Several dances were held over the next few years and finally, by 1950 enough money had been raised for the purchase of Lawrie Park gravel and Colas to build a tennis court near the oval. Scrub posts were used for the fences and donations of the necessary wire were received. Alec Tobiasen offered to build the first tea pavilion, but it was some time before they were able to boil the water for afternoon tea there. In the meantime, Mary Hocking had kindly made boil­ing water availabe each week.

At the Annual General Meeting in August 1953 when D. Mugford was president and Kathleen Smith secretary, Stan Hocking was presented with Life Membership in recognition of his interest over the years.

Guy Fawkes nights and Christmas trees became annual fixtures during the 1950’s and early 1960’s when there were up to eighty children living within the district. Another tennis court was laid during this period.

In 1959 a formal lease was obtained from the Lucindale District Council for the South West corner of the Parklands at an annual rental of 1 pound. A second tennis court was laid, a new luncheon shed erected and gas stove instal­led.

In more recent years the courts have been resurfaced, Mt. Gambier stone kitchen and toilets built and the cricket pitch raised and improved.

In 1985 a new tennis court was laid and a new Onga pump installed to enable the grounds to be watered. It also has a quick-filler for the fire truck. A tractor has been purchased from the Lucindale District Council.

The cricket and tennis teams each play in the Southern Ports Associations appropriate to their sport and have had varying degrees of success.

No early records of the Avenue Range C.F.S. can be found, but it is generally agreed that it was started in the mid 1940’s using privately-owned fire trucks.

One of its annual jobs was the burning of the railway line from Ardune to Bull Island. In case of a fire getting away the operator on the manual telephone would ring all the subscribers to the exchange to advise them as to whether they were needed. With the advent of the automatic exchange in March 1979 the Fire and Emergency Telephone number 66 0010 was allotted.

Avenue received its first fire truck in July 1982. So that a shed to house the truck could be erected, Mrs. Shirley Rivett donated a block of land near the Sports Ground and the shed was erected by voluntary labour in August of that year.

During the summer months regular practices are held and volunteers are rostered to drive the truck and operate the radio. 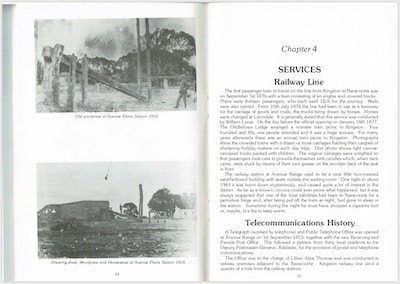