Life on the Range – Chapter 2

A large proportion of these early occupiers were of Scottish extraction and they quickly sent word back to their clan members in Scotland to get out to South Australia as quickly as possible so that they to could take up Pastoral Leases.

The leases in the Avenue Area were as follows: Lease No’s 221 and 292 known as Avenue Plains, having a total area of 56 square miles. These lease? belonged to T. Morris and covered the Avenue Plains from about Cairnbank to about Crower (221) and an adjoining area (292) including some of the Reedy Creek flood plain.

Lease No. 218 to the east of lease No. 221 having an area of 120 square miles which covered the Ardune Plains and the Joyce Plains and extending south to about Broadlands.

A track extended after some years of occupation from Robe Town through Avenue Plains and Jacky White’s lease to Cockatoo lake and the Lochaber country. When I first bought country in the district I found traces of these old highways on Section 68 Hnd Townsend and Section 10 Hnd Joyce.

In the days of the sly grog shanty the swamps on section 62 and section 78 adjacent to the shanty were densely covered with Kumbungie (Bull Rush) as they were almost permanently wet. The bullock teamsters who visited the shanty allowed their bullocks to graze on these swamps until they either ran out of money or had slaked their thirsts.

On Jacky White’s swamp which covers all of section 147 Hundred of Townsend Jacky White used to run a mob of milkers. His yards where the cows were milked were on the east side of what was known as the Almond Hill (during the time it was part of Ardune) amongst the bracken.

These cattle caused erosion in the area of the yards and when Seekers bought Ardune about 1910 there was quite an extensive blow-out where the yards had been. The area was consolidated by planting Marram Grass and no longer drifts but the blow out still remains.

Jacky White made his milk into cheese and this was carted to and sold in Adelaide by the dray load.

In those days, there was no Drainage Scheme so the water had to find its way across the land both by natural water courses and by seepage.

Water from the Joyce plains flowed through a gap in the Ardune Range where the road and railway now come. This water, as well as water from the south ‘flowed into a series of swamps on the eastern side of the Avenue Range, and eventually into Jacky White’s Swamp. From Jacky White’s swamp there was some seepage water south through a valley in the Avenue Range but the bulk of the water escaped by flowing into runaway holes on the western side of the swamp to eventually come up as springs on the Avenue Plain. Similar run­away holes existed on the western side of the Reedy Creek swamp complex. Round about 1900 Fred Feurheerdt and his brother from Crower went down one of these runaway holes on Reedy Creek but the cave became too restricted after a distance of 100 feet.

John White (Jacky) was one of the earliest permanent residents in the Sou?h East. In 1843 he selected land in what is now the Hundred of Townsend, and m 1846 he increased his holding to 126 square miles. The huge run took in nearly all Townsend and much of the Hundreds of Minniecrow and Conmurra. At the widest point his boundaries extended from almost Reedy Creek to Lucindale.

He had arrived at Holdfast Bay with his brother George early in December 1836 -even before Governor Hindmarsh in the “Buffalo”. He settled near the River Torrens for a short time, but then felt the urge to move. He had 500 head of cattle overlanded from Sydney by one Donald Ferguson who later became his overseer. It was not long before he had more than 2,000 cattle at Avenue Range. Returns for cattle were very poor, but with the finding of gold at Ballarat, he set up a butchery and sold meat to the passing gold prospectors and their families. He also ran a dairy on a site called the old garden near Ardune. He no doubt used his produce to supply his accommodation house in Avenue Range. He relinquished his holdings in the South East in 1859 selling to Messrs. Roberts, Charles Stewart, William Stewart and R.N. Falloon.

All that remains of his homestead are a few almond trees and a sandy patch where his stockyards were sited about one mile east of Avenue near the railway line.

Jacky White’s drain, east of Avenue, was named after this man. It was dug in 1884 and made much of the low-lying land usable for stock. Stone from the drain was carted for the building of the Avenue Church and School in 1901. 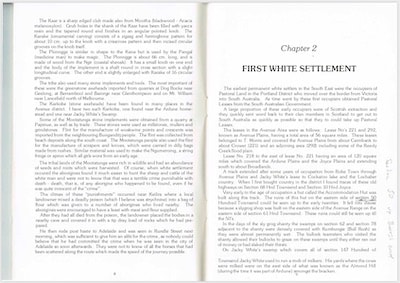