Special thanks are extended to:
All those members of the Avenue community who responded to our call for contributions to this booklet.
Margaret Hensel for her great help with the typing of the manuscripts. Our sponsors: Lucindale Hotel Social Club
Vivco Lucindale Elders GM, Lucindale M.H. Monfries Pty. Ltd. Barrett Distributors
The editorial committee – Shirley Barnett, Brenda Hensel, Phyllis McDowall and Judith Mugford.

When I was a secondary student in Adelaide one of my friends from the Adelaide Hills remarked, “Fancy living in the South East – nothing but swamps and sandhills.” Up to that stage this was a popularly held view by people from outside the area. In retrospect, I suppose they could be forgiven for thinking so, as in all probability it looked like that when they visited the area.

During the 1930’s the C.S.I.R.O. did a lot of research into trace elements and Norman McBain did some pioneering work on strawberry clover on his property near Struan. By 1940, apart from pockets of good country like the red gum country between Frances and Kalangadoo, the volcanic soils near Mt. Gambier and the Millicent Drainage area, the rest of the South East was a sleeping giant just waiting to be awakened.

In the middle of the South East is the Lucindale area which was typical of this undeveloped South East. Eight miles to the west is Avenue Range, an area and a community dating back to the early days of the State, when pioneers like James Brown took up Keilira, Jacky White acquired his station to the east of Avenue, Stewart acquired Cairnbank and Mcinnes acquired Crower. It was not until 1872 when the railway was pushed through to take wool and produce from the Mosquito Plains or Naracoorte area to the port at Kingston, that some form of closer settlement started.

During World War II the Department of Lands visited the larger property owners in the South East and arranged the purchase of suitable land for the settlement of soldiers who would be returning after hostilities had ceased. Major areas were opened up for settlers at Eight Mile Creek, Penola, Padthaway and Lucindale with smaller areas in other parts of the South East. Some 60 odd settlers were established in the Lucindale District Council area of which Avenue Range had 5, 10 or 18 settlers depending on where one considers the boundary should be.

The 1940’s, the ’50’s and up to the mid ’60’s saw the rapid development of strawberry clover based pastures on the Avenue Flats and later the establishment of lucerne-based pastures on the formerly useless sandy range country. This book attempts to tell the story of the people, pastures and fortunes of Avenue Range.

Until recent years in the smaller towns throughout the nation, the tendency was for people to come to the area, make their pile and then retire to the city or a large country town taking their money, and more importantly, their memories with them, leaving the smaller country towns with a loss of their roots. For­tunately, in recent years this trend has reversed, with retirement villages, improved services and other amenities to make these smaller towns a retirement alternative, thus helping to make it possible to tap the oral history of the senior citizens before it is lost forever. It was always a pleasure for me to encourage the older citizens of Avenue Range, such as the late Aitchison Grieve and Mary Smith, to speak of their early years in the area.

With the 150 year Jubilee coming up it is fitting that attempts should be made to record the local history of the districts of South Australia, much of it still unrecorded.

The promoters of this project are to be congratulated on their efforts to get the older residents of Avenue Range to brush up their memories and commit them to paper. It gives me a great deal of pleasure to be associated with this project. 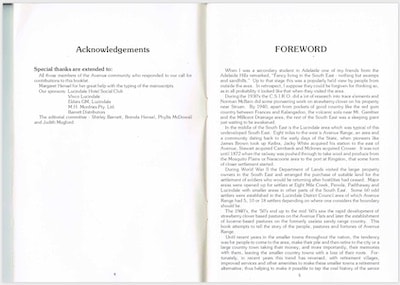