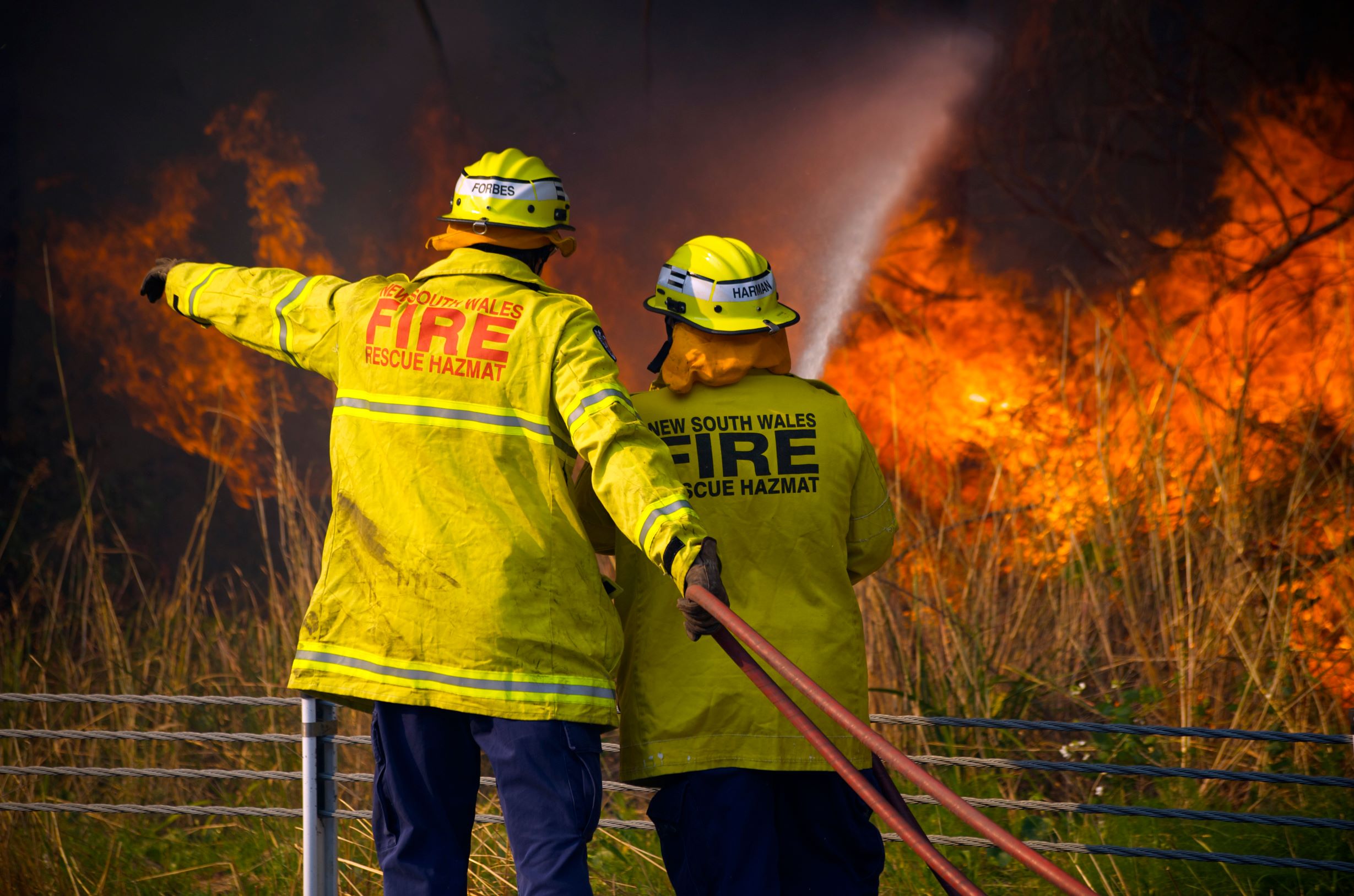 On Thursday 3rd January [2002], Ian Jenke, Ashley Wilkin, Rob Legoe and myself left Naracoorte by bus for Adelaide. We flew out of Adelaide at 4.30pm and arrived in Sydney at about 7pm.

Some of the 100 odd fires were very visible flying over the Blue Mountains and the smoke over Sydney was very thick. The sun was just an orange blur and visibility was down to about 1km.

We were accommodated at the Pacific International hotel in Paramatta. I shared a room with Ian Jenke and two other fire fighters, but we never met them. We were day shift, and they were night shift, so we passed each other at the handovers. This made the cost of accommodation economical.

Our days started at 5.30am, with breakfast and briefing and on the bus by 6.45am. The first briefing was a shock to us because we thought the Lucindale team would be together on the Lucindale truck. No way. We were split up and the next surprise was that I thought I would be on a hose but ended up Captain of the Wakerie truck with five  other blokes from all over South Australia that I had never met before.

The buses took over an hour to take us to the Linton area in the Blue Mountains. The handover from the ‘night crews’ to ‘day crews’ were classed as a cold change – all strike teams met at an oval, or similar area, and handed over at a leisurely pace – or a hot change, where you were taken to the truck on the fire ground.

Our first hand over was a hot change, in the middle of a back burn. Talk about thrown in at the deep end – strange truck, strange crew and in a fire situation never experienced before. Just to make things worse, the allocated driver was unable to handle the steep terrain and I had to take over as the driver. With the thick forest and very steep mountains, this was an experience in itself. The rest of the day was very much a learning curve. Most days we did not get back to our beds till 10:30pm.

The SA contingent consisted of six strike teams, which were: one forward control, five trucks and one tanker. The way the whole SA operation operated made the NSW effort look inferior. They could not even have a radio channel to themselves on either UHF or VHF.

Back Burns:
The way of firefighting is totally different over there. You never actually fight the fire. The Chiefs predict where the fire is going to go and you back burn breaks to protect houses etc, or try to direct or control the fire. The back burns are lit off breaks, made by dozers or single vehicle tracks or roads.

At times, it got so hot trying to control back burns, that the plastic on the roof lights, pro-cleaner element and paint on the doors of the Lucindale truck was melted. On one back burn, the local fire officer briefed us and said he expected to loose five to six houses, and that we should not let it upset us because we would protect another 100. We did not loose any, but it sure kept us on our toes and made for interesting times.

It was very tiring work and this was not just the length of the days. The heat of the fires was intense, the days fairly warm and we were advised to drink five litres of water per day. A lot of people collapsed from dehydration and exhaustion. We lost one of our crew-members for the last two days because of this.

We adopted the saying, “hurry up and wait”. This described the way we would either be flat-out fighting fires, or sitting around waiting for the next lot of action. You quickly learnt to relax when you could because you never knew when or where you could be in action next.

The local residents were very appreciative of our efforts and helped us get through the long hot days by cheering us along and putting out signs with encouraging messages on them. On one interesting occasion, our truck crew had to rescue a 19-foot python from a house, and a photo of this made the it into the Sydney Daily Telegraph.

Most trucks had a Metropolitan fire fighter on board and everybody was a bit apprehensive at the start, but once they learnt what to do, everybody got on well. One day we were to have lunch at the Woodford fire station, where there was a mass of activity, and about 500 metres away, a 16 year old girl was caught lighting a fire. Along with fire-bugs, we had to also contend with funnel web spiders and poisonous black berry bushes. When the heat and action was really on, it was not unusual to have three helicopters hovering overhead and it was reassuring knowing they were there.

The Mt Hall bushfire we were fighting in the Blue Mountains, burnt 122,000 hectares and was burning with a 70 kilometer front. The SA crews put in 140 kilometers  of back burns. A total of 567,000 hectares was burnt with a total perimeter of 3,025 kilometers.

It was a great learning experience in Sydney, and has given me more confidence to handle local situations, and also it was good to help our fellow firefighters in NSW.