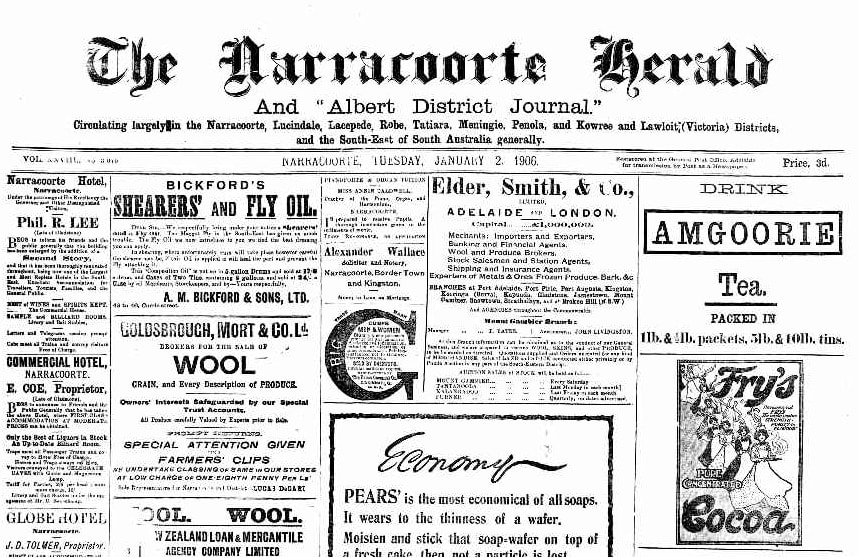 We should take our hats off to the pioneering families that came before us.  They had a tough time living in this region and they had plenty to endure.  Here’s a sad article in the Naracoorte Herald in 1906 reporting the death of young Jock Hensley, of Cairnbank, who died of diphtheria.

Diphtheria is a cruel, highly contagious, often fatal infection of the nose, throat and windpipe.    It was once one of the most common causes of death in children.  In Australia in the early 1900s—the same period when young Jock Hensely succumbed to the disease—there were more reported deaths from diphtheria than any other infectious disease.  In 1921, Australia experienced a diphtheria epidemic that resulted in over 4,000 deaths.

Early symptoms of the disease are no different to symptoms of the common cold.  So 100 years ago, a simple sore throat would come with dread and trepidation as families and communities waited to see if symptoms progressed.

Today diphtheria is easily treated with antibiotics.  And thanks to the development of a vaccine that was introduced in Australia in the 1920s, it’s now extremely rare in developed countries.   The vaccine forms part of the DTPa (diphtheria-tetanus-whooping cough) vaccine our babies and kids received today.

If each of us looked back into our family histories, we’d almost certainly find children, and sometimes several, whose young lives were cut short by diphtheria.   It’s a good reminder just how fortunate we are.

Article from the Naracoorte Herald, 1906, May 3

Quite a gloom was cast over our pretty little township on Saturday evening last, when it became known that death had visited the district, and claimed for its victim little Jock Hensley, aged 13 years, eldest son of Mr. and Mrs.. J. A. Hensley. of Cairnbank station.

Only a week before he complained of a sore throat, which afterwards proved to be diphtheria, to which he succumbed on Saturday afternoon, before Dr. .McLean, of Naracoorte, arrived.  Upon examination of four of the other children it was discovered that the two next eldest boys had developed symptoms of diphtheria, but by careful nursing and attention the little ones have recovered, and are now progressing favourably. The funeral took place at Cairnbank on Monday morning, the Rev.

James Barclay officiating at the grave. Great sympathy is felt throughout the whole district for Mr. and Mrs. Hensley in their sad loss.