Christmas comes to Avenue Range in 2019, report by ‘Candi Kaine’ 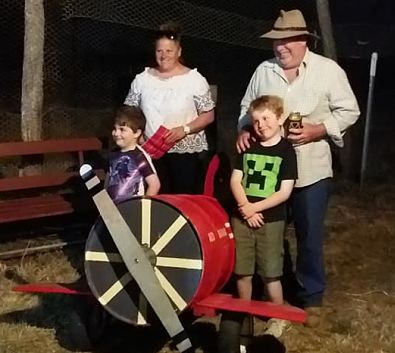 Christmas comes to Avenue Range in 2019, report by Candi Kaine

The annual Avenue Range community Christmas extravaganza was held with the usual pomp and ceremony. Around 40 people gathered to catch up on the year’s events, exclaiming “is it December already?” and shared some festive merriment. A key feature of the evening was the highly anticipated unveiling and awarding of ‘the pig’.

The sports club grounds were looking magnificent thanks to the postmaster on the tools. To add to the ambience, he attempted to add in a water feature for the event, but unfortunately thirsty sheep put a stop to that.

The mayor and elf Samantha put together a magnificent array of prize packages. Anyone going home with a prize would have welcomed the thought put into the festive packages of Christmas joy they received.

As with tradition, it was nearly dark before the official proceedings got underway. On dusk the gathering strolled (and Uber Rex for those not up to strolling) to the pop-up tree feature area. Whilst small in number, the quality of this year’s pop-up trees was of the usual high standard. Despite this, there was an unprecedented number of #1 votes to the winning tree. Michelle Oliver’s hand-crocheted bailing twine creation was a clear winner! The creativity and effort was apparent and the crowd awarded her with the winner’s trophy. Not only has Michelle provided us with a delightful community decoration, we now have a use for all that baling twine stockpiling across farms. Nice work Michelle!

As day turned to evening, the crowd moved back to the sports club for the main event. What would ‘the pig’s’ transformation be this year? What was under that massive cloche of tarpaulin? Did the Holmwood tribe put more effort into ‘the pig’ than they put into their gate decorations? Who would be the new custodian of the magnificent beast for the next year? Much excited chatter ensued as the judges conferred over the final votes.

Finally it was time. The big reveal was about to take place. To a figurative drum roll and hushed murmur across the crowd, the winner of ‘the pig 2019’ was announced as the Reynolds family!

The magnificence of ‘the pig’ was then revealed to all in the shape of a Red Barron. Heard across the throng was claims of “the creativity”, “the workmanship”, “I want that at my driveway”, “very apt creation from Holmwood” – such a delight to all gathered!

The Red Barron PIG was unleashed. Huge commendation to David and his grandson Ned! Their talent was apparent in pulling together such an icon along with Annie’s noticeable creative flair.

Congratulations to the Reynolds family of Avenue for their beautifully decorated Christmas gateway. A definite winner in the Christmas decorated gate stakes and we look forward to their reimaging of ‘the pig’ for the 2020 reveal in 12 months’ time.

Coming a close second was the Rivett family whose creations delight all that drive by on the way to Kingston. Word is they start planning and building in January ready for their December installation. They certainly set the bar high for other contenders across the district. The Higgins family came third with their ‘Santa Trailer’ Christmas cheer at the Patanga gate.

Awarded on the evening was a “Try Harder” prize. This traditional prize is generously given to a gate in the community that needs incentive to spruce up for next year. As Annie and David can attest, the “Try Harder” prize can quickly morph into a Thomas the Tank Engine at the end of your drive. Take heed Walteela crew…you could be next in line!

Thanks to all those who make special efforts to join in this community tradition and bring joy to those that drive by.

The history of ‘the pig’ will be told in a future edition.

For a full picture commentary of the entries and the night, visit the Avenue Range community Facebook page.