Life on the Range – Chapter 1

At the time of the first white settlement the Avenue country was occupied by the Mootaiunga people whose tribal boundary extended from just south of Robe north-easterly to just south of Lucindale and then in a northerly direction roughly along a line a bit west of Bakers Range to Salt Creek.

They were very gentle people and had a common language with other South Eastern tribes as well as those just over the Victorian border. They also shared major cultural features with other tribes to the north as far as those tribal areas associated with the River Murray. Many of these tribal groups, such as the Mootatunga people had access to the coast and/ or to permanent waters such as the Murray and inland swamps and lakes and they were able therefore to de­velop a relatively stable and settled way of life.

Within this cultural complex, the aboriginal societies developed many sophisti­cated artefactual techniques, particularly the development of the returning boomerang. The two Ketum-ketum (boomerang) which I possess, belonging to the Mootatunga people, are very delicately made from Ngir (coastal sheoak – Casuarina stricta) being extremely thin, but nevertheless a perfect aerofoil and are about 55 cm. long and 7.5 cm. wide. They are much shorter and wider and lighter than other boomerangs I possess which came from western New South Wales and south west Queensland.

Other interesting tribal wooden tools are the Kana, the Malkar, the Kaar and the Plonngge. All of these aboriginal artefacts were collected in the district in 1879 by Alexander Matheson, the first District Clerk of Lucindale.

The Kana, a lubra’s yam stick is 66 cm. long and about 5 cm. in diameter at its thickest part. It is very sharply pointed at both ends, which have been hardened by fire. One end tapers very gently to a fine point and is decorated by Karake (ornamental carvings) which in this case take the form of grooves encircling the stick to within 8 cm. of the end. The Kana appears to be made from Mootha (blackwood) .

The Malkar, a heavy narrow shield is a metre long and is made from the wood of the Koora (dryland teatree). This shield is very heavy in comparison with other aboriginal shields and of a quite different design being triangular in cross section. At the centre where a hole is carved for a carrying handle, the shield measures 11 x 11 x 15 cm. and it tapers evenly to a point at each end. The out­side face has a slight curve both vertically and horizontally and the Karake (ornamental carving) forms seven interesting patterns of incised angular grooves, each separated by an uncarved band. These bands have been stained with a black dye.

The Kaar is a sharp edged club made also from Mootha (blackwood – Acacia melanoxylon). Grub holes in the shank of the Kaar have been filled with yacca resin and the tapered round end finishes in an angular pointed knob. The Karake (ornamental carving) consists of a zigzag and herringbone pattern for about 10 cm. up to the knob with a crisscross pattern and then incised circular grooves on the knob itself.

The Plonngge is similar in shape to the Kana but is used by the Pangal (medicine man) ‘to make magic. The Plonngge is about 66 cm. long, and is made of wood from the Ngir (coastal sheoak). It has a small knob on one end and the body of the implement is a shaft round in cross section with a slight longitudinal curve. The other end is slightly enlarged with Karake of 16 circular grooves.

The tribe also used many stone implements and tools. The most important of these were the greenstone axeheads imported from quarries at Dog Rocks near Geelong, at Berrambool and Barorge near Glenthompson and on Mt. William near Lancefield north of Melbourne.

The Karkobe (stone axeheads) have been found in many places in the Avenue district. I have two such Karkobe, one found near the Ardune home­stead and one near Jacky White’s Swamp.

Some of the Mootatunga stone implements were obtained from a quarry at Papinue, as well as by trade. These stones were used as millstones, mullers and grindstones. Flint for the manufacture of woakwine points and crescents was imported from the neighbouring Bunganditj people. The flint was collected from beach deposits along the south coast. The Mootatunga people also used the flint for the manufacture of scrapers and knives, which were carried in dilly bags made from rushes. Similar material was used to make the Ngumeroing, a string fringe or apron which all girls wore from an early age.

The tribal lands of the Mootatunga were rich in wildlife and had an abundance of seeds and roots which were harvested. Of course, when white settlement occured the aborigines found it much easier to hunt the sheep and cattle of the white man and were not to know that that was a terrible crime punishable with death – death, that is, of any aborigine who happened to be found, even if he was quite innocent of the “crime”.

The climax of these “punishments” occurred near Keilira where a local landowner mixed a deadly poison (which I believe was strychnine) into a bag of flour which was given to a number of aborigines who lived nearby. The aborigines were encouraged to have a feast with meat and flour supplied.

After they had all died from the poison, the landowner placed the bodies in a nearby cave and covered it in with a tip dray load of rocks which he had pre­pared.

He then rode post haste to Adelaide and was seen in Rundle Street next morning, which was sufficient to give him an alibi for the crime, as nobody could believe that he had committed the crime when he was seen in the city of Adelaide so soon afterwards. They were not to know of all the horses that had been scattered along the route which made the speed of the journey possible. 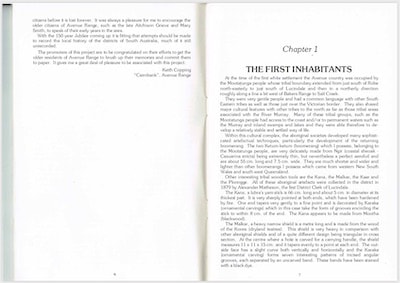